Baseball! Toronto takes the Blue Jays pretty seriously (after hockey, maple syrup and beer). I saw them play the NY Yankees in the mostly full, 50,000+ capacity Rogers Centre downtown. And they won!

The stadium has a retractable roof (was opened for nice weather) and Blue Jays fans dressed in branded blue were pouring through gates with a power of the Niagara Falls.

Fans at the gates 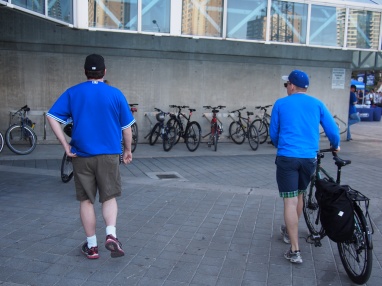 Luckily, as baseball is not prevalent outside North America, I had 3 helpful locals next to me explaining the rules. My understanding is that players wear tight pants, carry bats for personal protection, steal bases to take them home, and wear a single glove like Michael Jackson. No sequins or moonwalk though – just a super energizing hip routine from a guy called Jose Bautista.

Jose Bautista and his hips

Blue Jays dedicated a couple of minutes to the legendary baseball columnist Bob Elliott who has retired from  the”Sun” (= TimeOut Toronto) on May 31st. 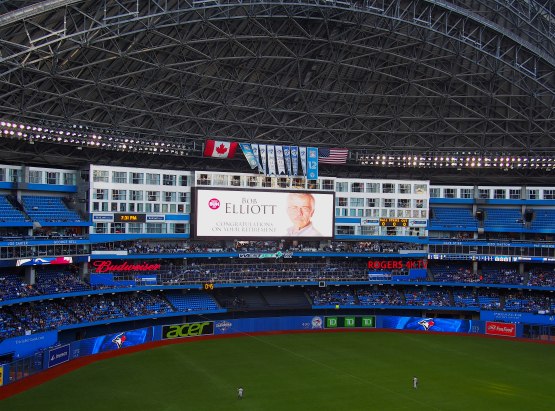 The only area cricket has baseball beat is the mandated tea breaks. But! Baseball outshines cricket with their Cheerleaders! They are truly the glam, chic, beauty, vibe and fun of the game and the only girls who moved comfortably and freely on the field without police interference.

It did not appear anyone was shy about branding. Sport is a business and is definitely run as one. 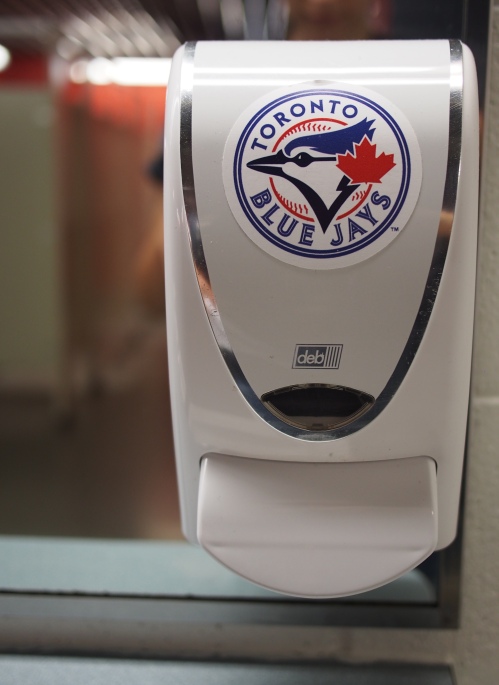 By the time sun went down – the stadium was groaning with anticipation of forthcoming victory and CN Tower burst into rainbows. The NY Yankees showed no desire to score, loosing 7-zero and it was very exciting to see happy Blue Jay’s fans booing, cheering and sharing joy.

That what baseball does to a normal girl 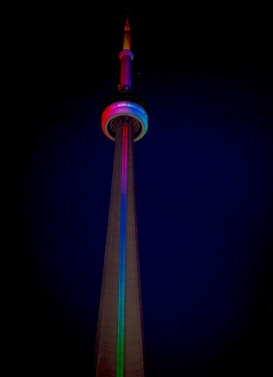 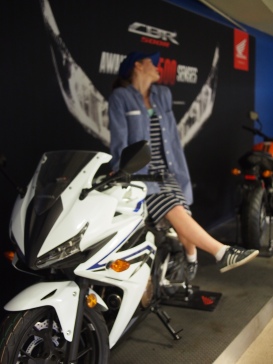 Watching girls and boys shake their hips made me hungry for chicken and freedom. Fortunately the most Canadian shawarma was just next door. History is indeed now 🙂

P.S. The first recorded game of baseball in Canada and arguably the fist ever way played today – on June 4th in 1883 in Beachville on a field behind a blacksmith’s shop.

Girl with a questionable taste in cats and fashion. Stalk me on Instagram - anna_trestain View all posts by Anna Trestain